South Dakota Can Compete With The Best Of States: Governor Dennis Daugaard

“If the total damage for the state of South Dakota exceeds over a million dollars, we would qualify to be considered for disaster declarations, “ said Dennis Daugaard, Governor, South Dakota.  “You look at it county-by-county, and if there is enough damage, you can apply for that county.  If there is damage to public infrastructure such as road damage or bridges washed out, which is the most expensive damage and leads to a disaster request.”

Daugaard recently went to Connecticut to talk with businesses to consider South Dakota as a part of Forward Sioux Falls Foundation effort to encourage site selectors to see South Dakota on their radar screen.  If there is a company that has more demand than they can supply, they may want to expand to a location like Sioux Falls.  Businesses won’t look at all 50 states, they will look at places that are best for business.

“We thought as long as we made the trip, it would be good to make productive use of our time, so we made visits to arms manufactures in Connecticut, businesses in New York and back home,” said Daugaard.  “Most people think of South Dakota as visiting Mount Rushmore and don’t think about the solid business climate.  We use the Tax Group and the Chamber of Commerce to show these site selectors they should be thinking of South Dakota along with any others.”

Daugaard said, luring businesses to South Dakota is fiercely competitive with other states like Texas who offers many of the same benefits.  Texas is larger than South Dakota with a larger advertising budget, but South Dakota is more productive than Texas.  The frequency of flights in and out of South Dakota is a concern.  We have to show how often planes go in and out of the airports here and we do have access to major hubs.

“Other areas of concern is the activation of Airmen from the 114 Fighter Wing which includes 30 in the next two weeks and 200 in July,” said Daugaard.  The Egg Summit is coming up in Pierre next week and with the Farm Bill not getting through Congress, there will be a lot of discussion about that.  There was a lot of disappointment with the bill not going through because it affects economic planning and the uncertainty.”

Daugaard said that it’s a good feeling to talk to businesses about South Dakota.  It is always easier when you have a good product to sell. 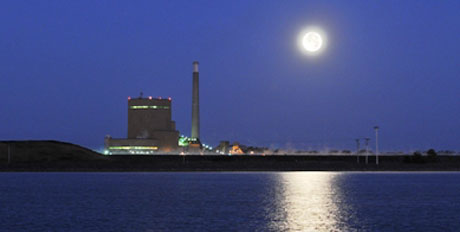 Otter Tail Power Company serves 49 South Dakota communities, with an average population of 358. In all, our company provides electricity to 422 communities in Minnesota, North Dakota, and South Dakota. Ottertail has offices and generating resources in 10 SD communities.